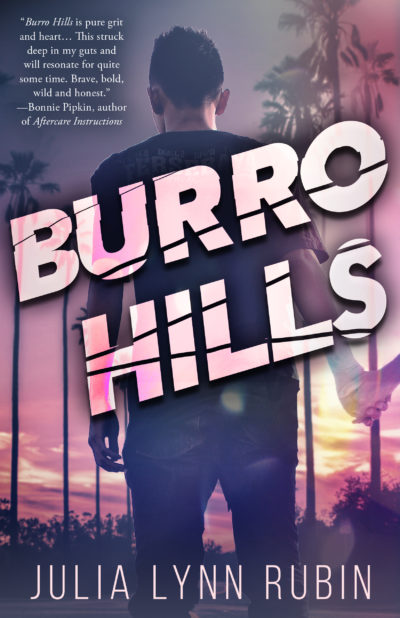 “Are you a fan of The Outsiders and Perks of Being a Wallflower? Now imagine them mashed together. That’s what awaits you in Burro Hills by Julia Lynn Rubin.” —YA Interrobang

Jack Burns is a resident—though oftentimes he feels like an inmate—of the tiny, California desert town of Burro Hills. Growing up surrounded by the broken dreams of his parents, Jack wonders if he will ever just get out. Get out of dealing drugs. Get out of poverty. Get away from the suffocating masculinity in high school boys. And get out of his own head. When he’s not running with his crew and trying to stay under the radar, he is in his favorite spot with his best friend, Jess, fantasizing about escape.

Until Connor Orellana shows up. The new boy captivates everyone in school, including Jack, who is magnetized by Connor’s lack of self-consciousness and inhibition. As their connection deepens, Connor challenges him to see that liberation comes from accepting and trusting his nature, while Jack helps ground Connor and the dark energy that drives his free spirit. But their relationship will set into motion a series of events that have lasting consequences, jeopardizing Jack’s budding romance with Connor and the life he’s tried so hard to salvage in Burro Hills.
Rubin, Julia Lynn

"Rubin's gritty coming-of-age story has a strong sense of place and taut suspense. I was rooting hard for Jack and Connor from the get-go; you will, too." —Kim Savage, author of After the Woods and In Her Skin

"Gritty and atmospheric, suffused with an acute consciousness of place and class, Burro Hills is a powerfully written novel about speaking your truth and finding your way in a dead-end town." —Margot Harrison, author of The Killer in Me

"Julia Lynn Rubin crafts Jack's journey of self discovery with pitch-perfect dialogue and page-turning tension. Rife with dysfunctional families and complicated romance, Burro Hills is a vivid portrait of one teen's search for acceptance." —Gillian French, author of The Lies They Tell

"Burro Hills is pure grit and heart. It has everything my reckless teenage self would have wanted (needed) from a book. Jack is the best friend I had in high school, and Burro Hills is the town I desperately wanted to leave. This struck deep in my guts and will resonate for quite some time. Brave, bold, wild and honest." —Bonnie Pipkin, author of Aftercare Instructions

"A dark, disturbing, romantic, riveting debut novel that dives deep into the broken-down working class world of a small California town and its high school teens-stoners and skateboarders lead this brave story of sexual awakening, and love, among boys at the precipice of adulthood. I particularly admire Rubin's choice to tell the story solely from Jack's point of view, delving into his dysfunctional family life, his desires for something more, and his poignant realizations about his own sexuality. Burro Hills is a page-turning story of one young man's courage to know himself. Last thought: Rubin's novel reminded me of Tobias Wolff's classic, This Boy's Life, another Jack, in another time, but just as poignant." —Caroline Bock, author of Lie and Before My Eyes

"With echoes of Francesca Lia Block and S.E. Hinton, Burro Hills feels like a fever dream: dark, dangerous, but full of beauty so raw it hurts. Jack and Connor have all of my heart, and so does Julia Lynn Rubin." —Rebecca Christiansen, author of Maybe in Paris

"With raw intensity and complex characters, Rubin opens a world of emotions that will resonate with readers." —Jessica Kapp, author of Body Parts

"Gritty and utterly addicting, Burro Hills hooked me from the start. It's an absolutely stunning debut from Julia Lynn Rubin, and this is one book you'll be reading (and re-reading) for ages. Honestly, I read it in *two hours*, and I'm not even sorry." —Jandra Sutton, author of Fragile

"Rubin's writing is vivid and exciting. I was hooked on Jack from beginning to end. Set in a flashy California town, an interesting romance blossoms in this important coming-of-age story." —Lisa M. Cronkhite, author of Fix Me

Julia Lynn Rubin lives the writer's life in Brooklyn, where she has recently finished an MFA in Writing for Children & Young Adults at The New School. She received her BA in Anthropology & Film...