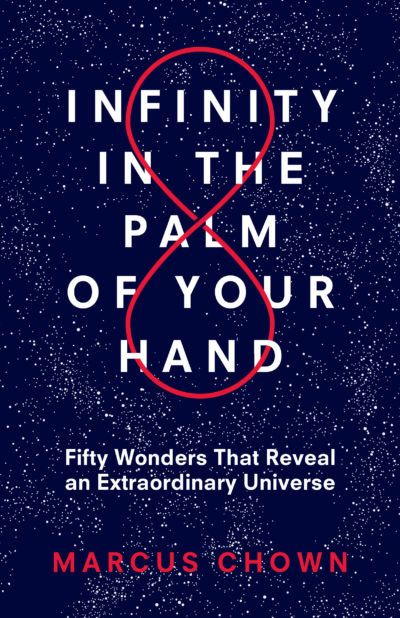 Infinity in the Palm of Your Hand

A mind-bending journey through some of the most weird and wonderful facts about our universe, vividly illuminating the hidden truths that govern our everyday lives.

Fact: You could fit the whole human race in the volume of a sugar cube.

Fact: The electrical energy in a single mosquito is enough to cause a global mass extinction.

Fact: You age more quickly on the top floor than on the ground floor.

So much of our world seems to make perfect sense, and scientific breakthroughs have helped us understand ourselves, our planet, and our place in the universe in fascinating detail. But our adventures in space, our deepening understanding of the quantum world, and our leaps in technology have also revealed a universe far stranger than we ever imagined. With brilliant clarity and wit, bestselling author Marcus Chown examines the profound science behind fifty remarkable scientific facts that help explain the vast complexities of our existence.

Bestselling author Marcus Chown explores some of the most profound and important science about us, our world, and beyond by examining some astonishing facts that reveal the vast complexities of the universe. Perfect for fans of Astrophysics for People in a Hurry and  A Brief History of Time.

A Talk with Marcus Chown, Author of Infinity in the Palm of Your Hand

My dad got me out of bed to see the first moon landing. I still can’t believe I was lucky enough to be a kid when the first human stood on another world, surely as significant an event in the history of life as the moment the first fish crawled out of the sea onto the land 380 million years ago. It was so exciting. Even writing this about it sends a shiver down my spine.

I am biased and would say space science. It’s hard to top a laboratory that’s the size of the universe!

One of the big mysteries in human biology is why women have a menopause. Only a handful of species, including humans and killer whales, shut down their reproductive potential early. Females of every other species keep reproducing until they die because that is the best way to produce the most offspring and ensure their genes survive into the next generation. One explanation of why humans do not do this is that a woman, by losing the ability to reproduce early, makes herself available to help her daughter raise children. Because her grandchildren share her genes, she is helping promote her own genes.

Can you explain the significance of your book’s title?

My original title was 50 Bonkers Things about the Universe. My publisher changed it. Infinity in the Palm of Your Hand comes from Auguries of Innocence by the English poet William Blake:

To see a world in a grain of sand

And a heaven in a wild flower

Hold infinity in the palm of your hand

And eternity in an hour

Of all the scientific breakthroughs and discoveries you reference in your book, which do you think was the most important?

Incidentally, the source of the first gravitational waves—two merging black holes—pumped out 50 times more power than all the stars in the universe combined. Or, to put it another way, had it given out light rather than gravitational waves, it would have shone 50 times brighter than the entire universe. The single most powerful event ever witnessed by human beings!

In your book, you say science writers have a lot in common with comedians. How so?

Is it true you’re one-third mushroom?

Well, you and I and everyone shares one-third of our DNA with mushrooms. It’s an indication that we’ve evolved by a process of natural selection from a common ancestor. Actually, the ultimate proof of this is that there is a particular sequence of DNA in every one of the 100 million cells in your body—in fact, in every cell of every creature on Earth. We truly are all brothers and sisters.

How old is today’s sunlight—and how do we know?

Today’s sunlight is about 30,000 years old—it was made at the height of the last ice age. We know this because “photons” of light have extreme difficulty getting from the core of the Sun, where they are created by nuclear reactions, to the surface, where they can fly off into space to the Earth. It’s a bit like you trying to fight your way down a crowded shopping street at Christmas. You have no choice but to zig-zag to avoid people. Similarly, photons in the sun are forced to take an incredibly tortuous zig-path to escape the Sun. Since we know how much stuff is in their way—specifically, the “density” of the Sun—we can calculate that they take about 30,000 years to get out.

What did you mean when you said that sunlight is just a byproduct? And aren’t you worried that people in California and Florida who depend on tourism dollars will hate you?

The main thing that is going on inside the Sun is the nuclear reaction that turns the cores, or “nuclei,” of hydrogen, the lightest element, into helium, the second lightest. There is some energy left over, and this becomes sunlight. That is the sense in which it is a “byproduct.”

In one of your chapters you say “Every breath you take contains atoms breathed out by Marilyn Monroe. Or Julius Caesar. Or the last Tyrannosaurus Rex ever to have stalked the earth.” How can that be?

Basically, atoms are very small: 10 million would span the full stop at the end of this sentence. That means there are an awful lot in every mouthful you breathe out. Think of how many “mouthfulls” of air it would take to fill the Earth’s atmosphere. It turns out that it’s fewer than the number of atoms in a single mouthful. Therefore, if the atoms in a mouthful of air breathed out by, say, Marilyn Monroe, spread out evenly around the world, every breath you take in will contain not one but several of those atoms. Don’t worry if that’s making your brain hurt. It’s making my brain hurt, too!

Your book hits stores one day after Earth Day. What do you say to people who don’t believe in global warming?

The earth is demonstrably getting hotter and we have ruled out the Sun being responsible. Carbon dioxide traps heat in the Earth’s atmosphere, and the rise in temperature over the past century perfectly tracks the rise in carbon dioxide from the burning of fossil fuels. Given that global warming is potentially catastrophic, even if you were highly skeptical of this, it would make sense to reduce the burning of fossil fuels in case you were wrong.

What did you mean when you said, “You are born 100 percent human but die 50 percent alien?”

Fifty percent of the cells in your body do not belong to you. They belong to microorganisms hitching a ride. For instance, there are about 30 million bacteria on every square inch of your skin, and you would be unable to even digest your food if it were not for bacteria in your stomach. But here’s the point: You acquire the foreign microorganisms only from your mother’s milk and from the environment. So, you are born 100 percent human but die 50 percent alien. 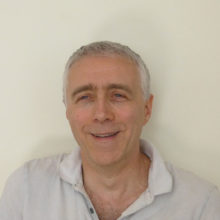 Marcus Chown is an award-winning writer and broadcaster. Formerly a radio astronomer at the California Institute of Technology in Pasadena, he is cosmology consultant of New Scientist. His books include The Ascent of Gravity (named the...