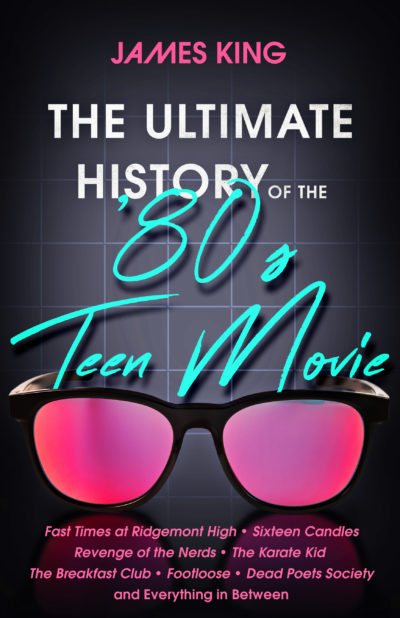 The Ultimate History of the ’80s Teen Movie

A trip back to the era of troubled teens and awesome soundtracks; of Reagan, rap, and Ridgemont High; of MTV, VHS and “Axel F”; of outsiders, lost boys, and dead poets; of Bill and Ted, Brooke Shields, and the Brat Pack; of three Porky’s, two Coreys, and one summer when everyone called her Baby.

The Ultimate History of the ’80s Teen Movie goes behind the scenes of a genre where cult hits mingled with studio blockbusters, where giants like Spielberg and Coppola rubbed shoulders with baby-faced first-timers, and where ambitious future superstars Sean, Demi, and Tom all got their big break. Music, comedy, and politics all play a part in the surprisingly complex history of the ’80s teen movie. And while the films might have been aimed primarily at adolescents, the best tackle universal issues and remain a magnet to all ages. Time of your life, huh kid?

A Talk with James King

Author of The Ultimate History of the ’80s Teen Movie

What is it about ’80s teen movies that made you want to write a whole book about them?

I’m from a small village in the east of England so when I grew up watching American teenagers in movies they all seemed so exciting and glamorous, like they were from another (much cooler) world. That feeling never went away. As a film student at university, I wrote papers on PRETTY IN PINK and FERRIS BUELLER’S DAY OFF, studying their style and their content. By the time I was a professional journalist I knew I had to write a whole book on the genre. I hesitated for several years though. If I were to do it, I needed it to be the right time. In 2016, after being encouraged to write a piece on FAST TIMES AT RIDGEMONT HIGH, it finally felt like it was something I could tackle.

Some of these movies had amazingly talented writers and directors attached to them. Who were some of the best and the brightest?

John Hughes and Cameron Crowe are probably the two best-known—and they both came from a writing background (Hughes at National Lampoon, Crowe at Rolling Stone). I think that life experience they had certainly helped with the authenticity of their movies and with both, the fact that they were still teenagers at heart, even when in their thirties, was a bonus. They were both really influenced by modern music and hadn’t forgotten what it was like to be in high-school. But I also found it fascinating to chronicle the opportunities given to many less-celebrated female film-makers during the era too—Martha Coolidge, Amy Heckerling, Amy Holden-Jones—and the subsequent struggles they faced.

In your opinion, who were some of the most underrated ’80s teen movie stars?

Judd Nelson had it all—ability, charisma, looks—but suffered with the curse of being branded a “Brat Pack” star. Emilio Estevez too. These were kids with huge ambition and talent but perhaps got too big, too soon. Charlie Sheen deserves to be more than just a punchline too. And in DIRTY DANCING and FERRIS BUELLER’S DAY OFF, Jennifer Grey gives two of my favorite “teen girl” performances of the ’80s.

And the most overrated?

Looking back at some of Andrew McCarthy’s performances, I’m surprised he was (briefly) as big as he was. And to be honest, I think he was surprised too!

They’re often written off as being about light topics, but what are some of the heavier and headier issues tackled in ’80s teen movies?

I’m disappointed that race and sexuality are rarely discussed in the films of the era but teenage pregnancy (FAST TIMES AT RIDGEMONT HIGH), bullying (LUCAS), and poverty (THE OUTSIDERS, PRETTY IN PINK) all get a look. And toward the end of the decade, influenced in no small part by Tim Hunter’s cult films such as OVER THE EDGE, TEX, and RIVER’S EDGE, things certainly started to get grungier. I end the book in 1989, when both HEATHERS and DEAD POETS SOCIETY dealt with teen suicide.

Some of the scenes in these movies are misogynistic at best and downright sexually assaulting if we’re honest about it. How can we, in the #MeToo era, reconcile our love of these films with what are now clear violations?

It’s certainly difficult. I had a very good chat with a regular collaborator of John Hughes’, the composer Ira Newborn, and he said to me that John wasn’t perfect, that he was hard to work with, but that no one ever wants to face up to that. They only want to hero-worship him. Writing this book I had to regularly abandon my hero-worshipping of certain films and certain filmmakers in order to make sure it wasn’t just a fluffy read, a whitewash of the facts. And the realization I came to was that a great film can still have moments in it that you disagree with, ideas that are horribly outdated. That doesn’t stop it being a great film overall. We need to acknowledge the flaws and deride them for what they are but that shouldn’t always mean completely writing something off. SIXTEEN CANDLES, for example, manages to be both horribly sexist and vaguely feminist at the same time!

OK, time for the ’80s teen movie face-off. The Breakfast Club or Heathers? Sixteen Candles or Pretty in Pink? Ferris Bueller’s Day Off or Fast Times at Ridgemont High? Say Anything or Some Kind of Wonderful?

Tough! THE BREAKFAST CLUB. PRETTY IN PINK. FERRIS. SAY ANYTHING. Although ask me another day and I’d give you different answers!

RISKY BUSINESS, for me, has real class. Tom Cruise is amazing, as is Rebecca de Mornay. The dialogue is whip-smart. And it’s directed with a serene, cool touch. It isn’t even the film that writer/director Paul Brickman had envisioned (he had to alter the ending) but it’s still head-and-shoulders above the other so-called “sex comedies” of the era. It actually has something to say about early ’80s America.

Mark Kermode calls James King "one of my favorite film critics and he writes with wit, flair and schoolboy-ish enthusiasm." King has presented movie shows for BBC Radio 1, 5Live, ITV and Sky and is...